Pirates at the Shed! 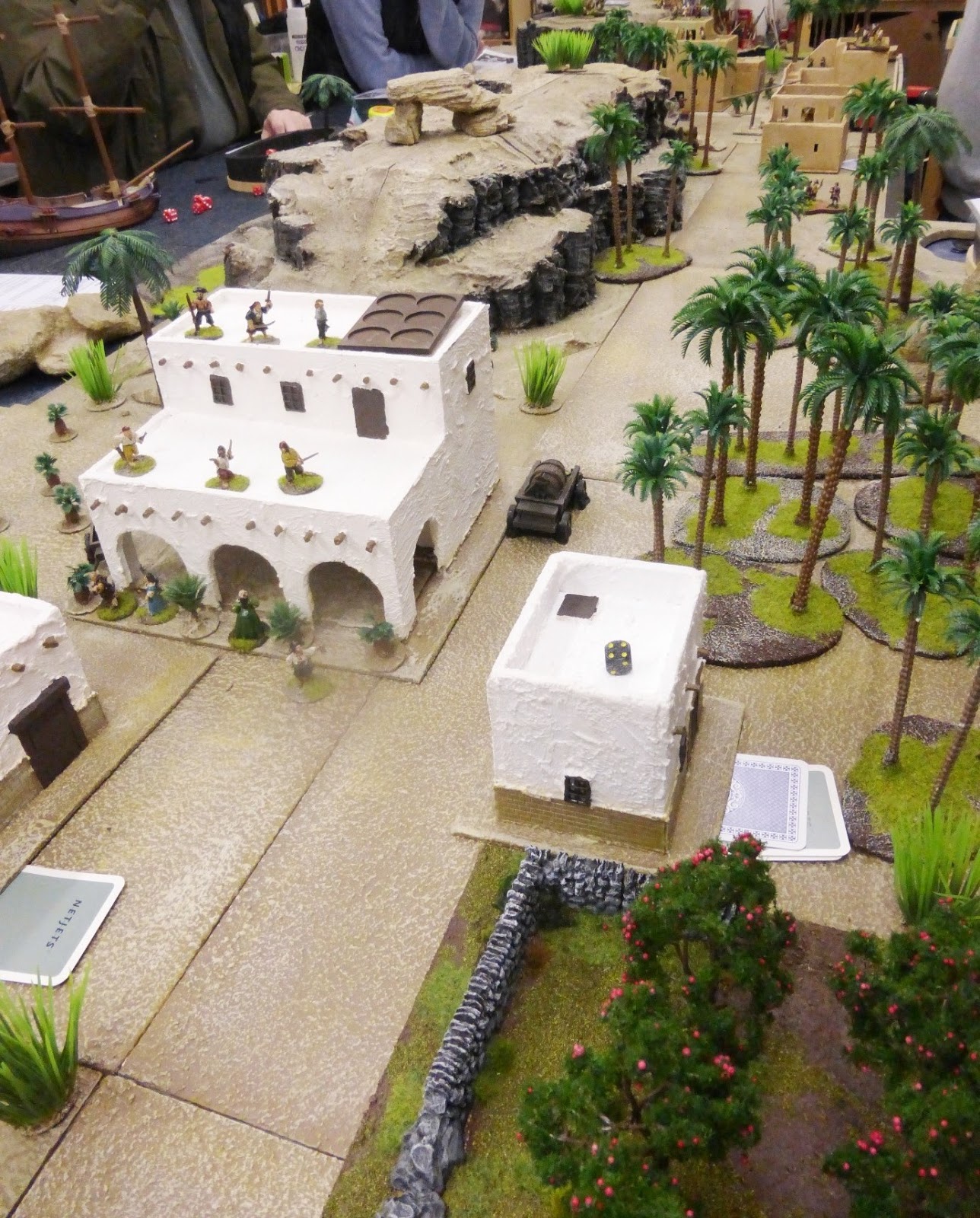 A view down the board


Eric the Shed kindly invited me over to his splendid shed for my first game of 2015.  This was doubly exciting as not only was it a pirate game but he let me use my own figures!  It is really nice to get an opportunity to play with figures I have painted myself and makes all the long hours worthwhile. I think, in the end, I got all my painted pirates on the table, plus a few of the less Tudor looking Foundry Swashbucklers.  A first action for the latter! 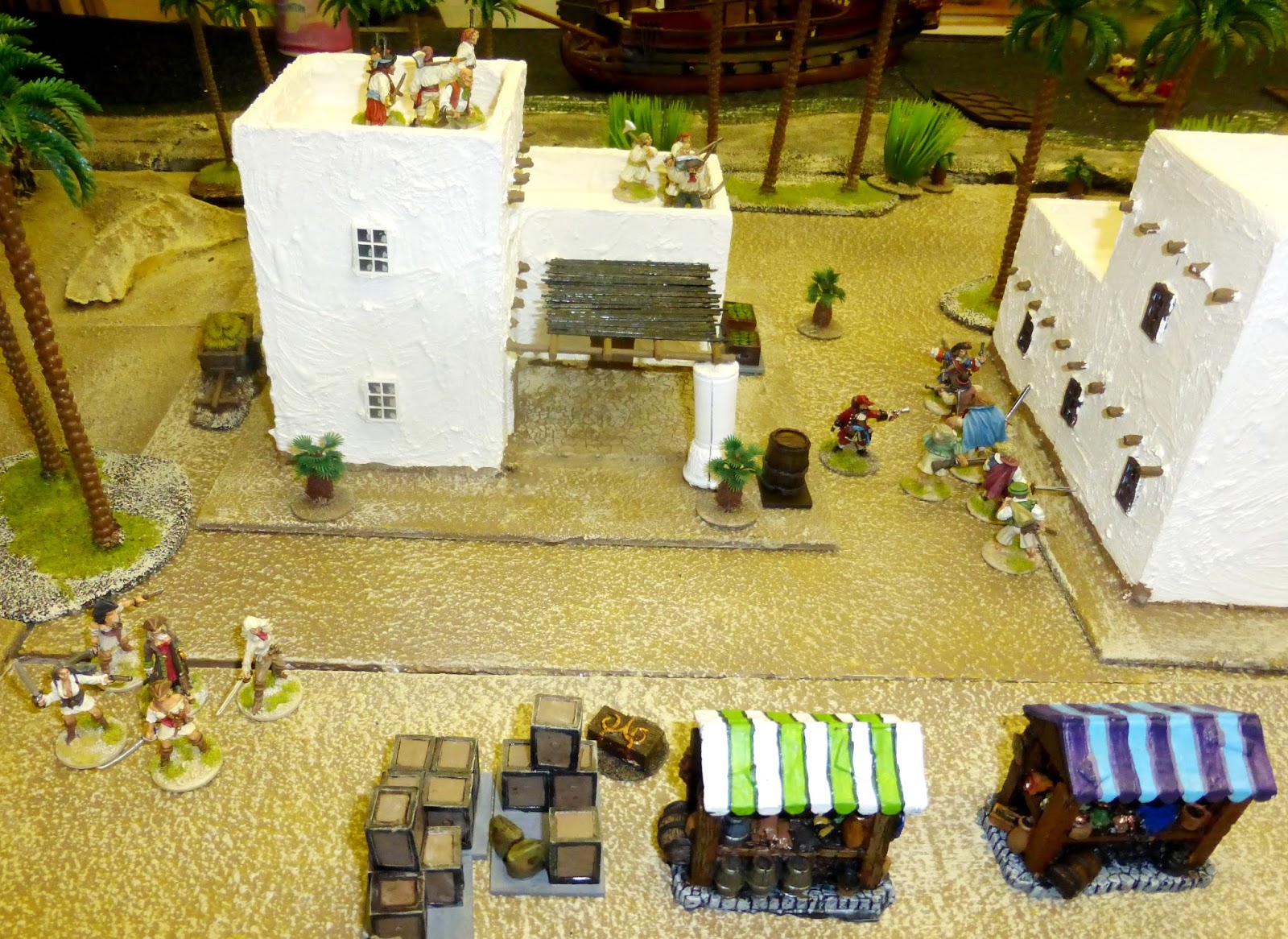 Lovely scenery as always at the Shed. My Black Scorpion pirate girls at left, Foundry Swashbucklers at right and Foundry pirates on the building,  Most enjoying their first outing

You always expect a spectacular layout at the Shed but I think this was my favourite so far and included a first game for his new modular rocky outcrops.  These made the terrain feel rather like the Pirates of the Caribbean online game, which my son and I used to enjoy playing so much before Disney pulled the plug on it, although it is due back soon under new management. 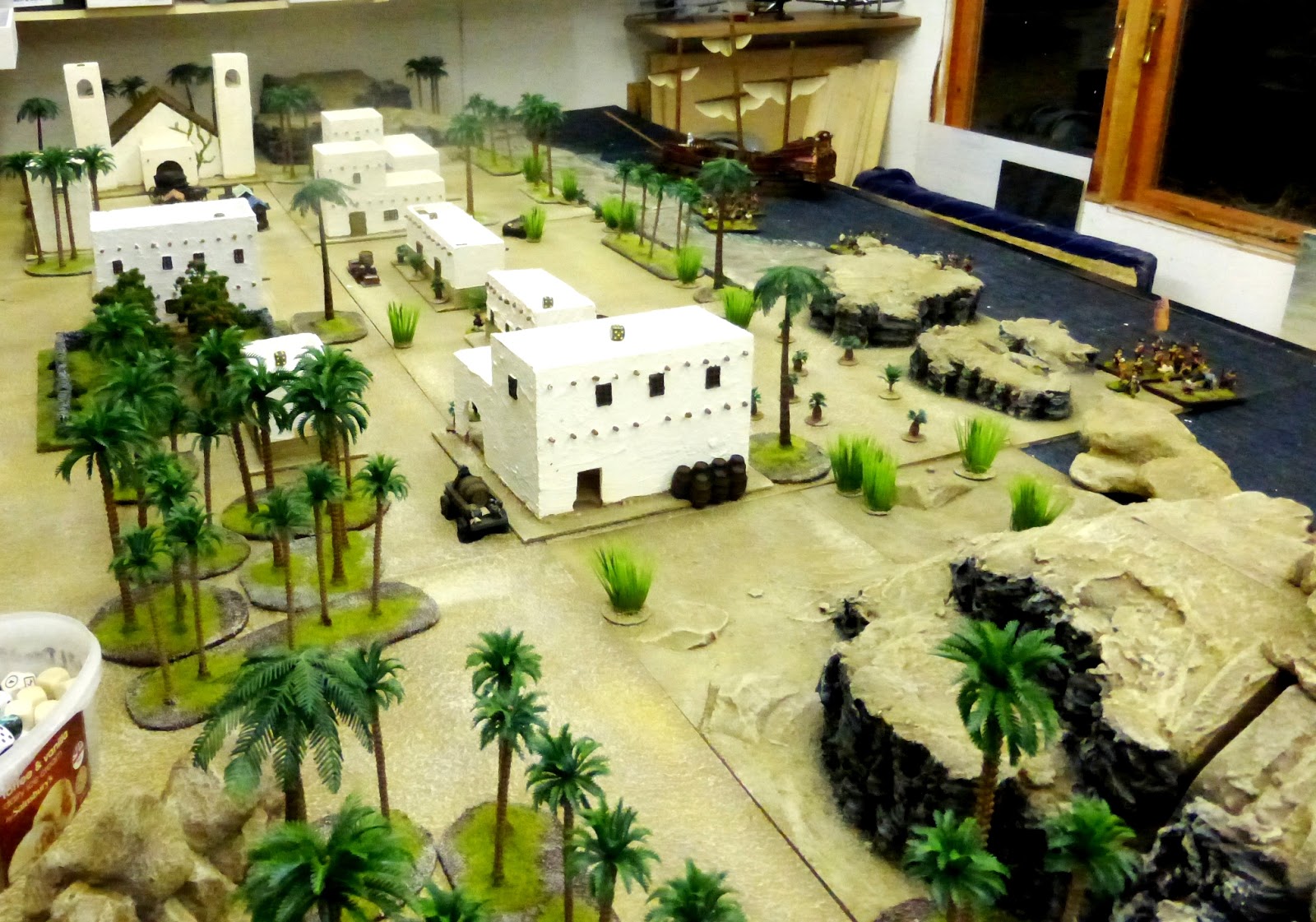 The game was set in the pirate town of San Pedro where the Royal Navy launched a landing to recover a group of hostages. There were two players, including me, on the pirates side and two players on the naval side. In essence it ended up as two separate games as we took an end of the town each. Although we could see what the navy was fielding, the pirate forces, who all started the game inside buildings, were activated by dice and cards so some of my units were just one pirate while one had eight. 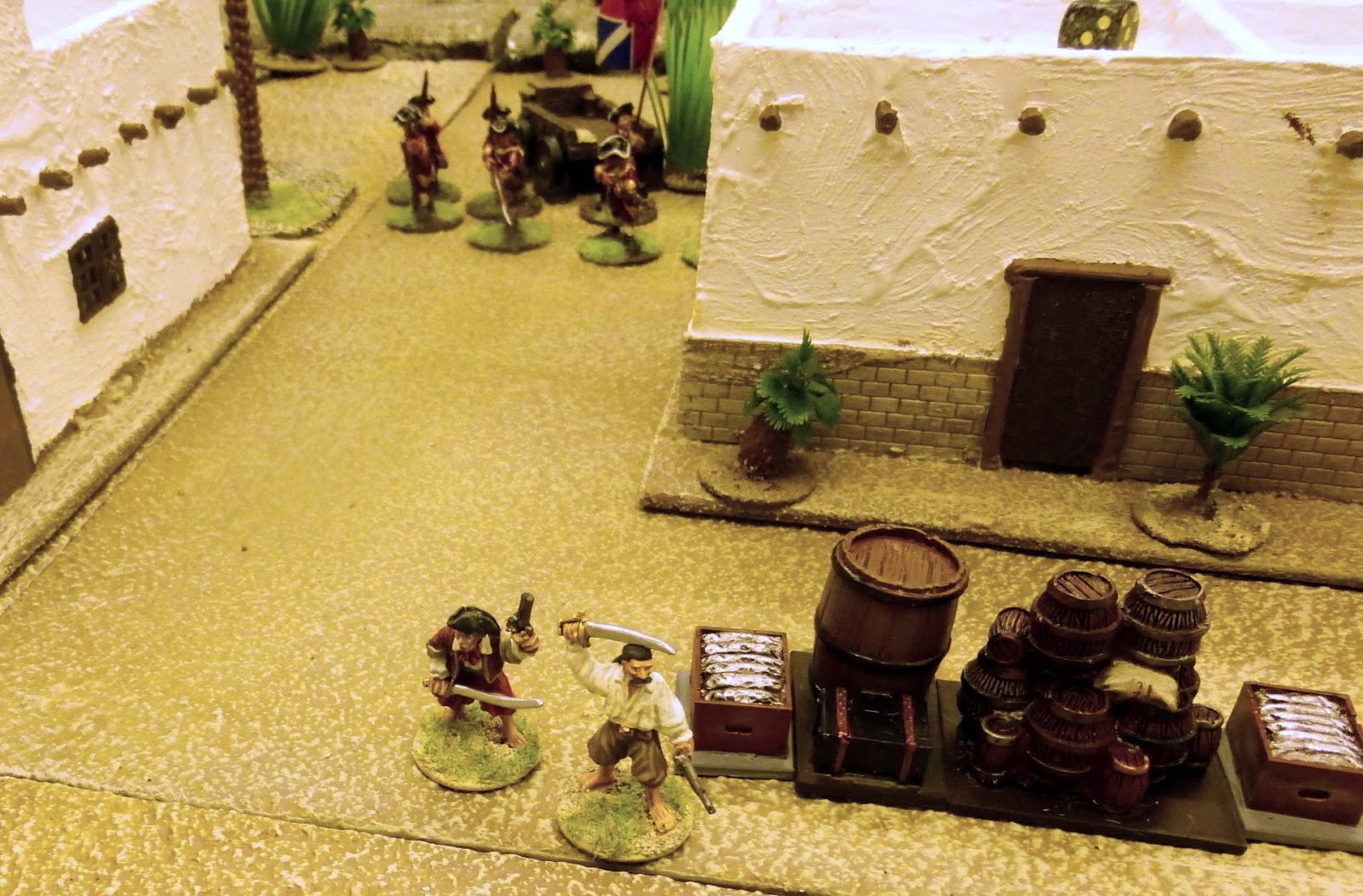 My first unit of pirates are driven off by the regulars.  Lovely clutter, as ever

The rules were a version of Musket and Tomahawk as adapted by Eric. I have played M&T once before at the shed but, as usual, I didn’t remember enough about it to understand some of the finer points. There was, for example, something to do with heroes getting certain extra actions but I couldn’t for the life of me remember what they were. So I played very reactively, as I wasn’t sure what I was doing or what the capabilities of my troops were. I was worried about getting into hand to hand combat with the regulars but then I discovered pirates were better in melee. If I had known this I would have got stuck in more.  As it was several of my groups of pirates didn’t get engaged at all. 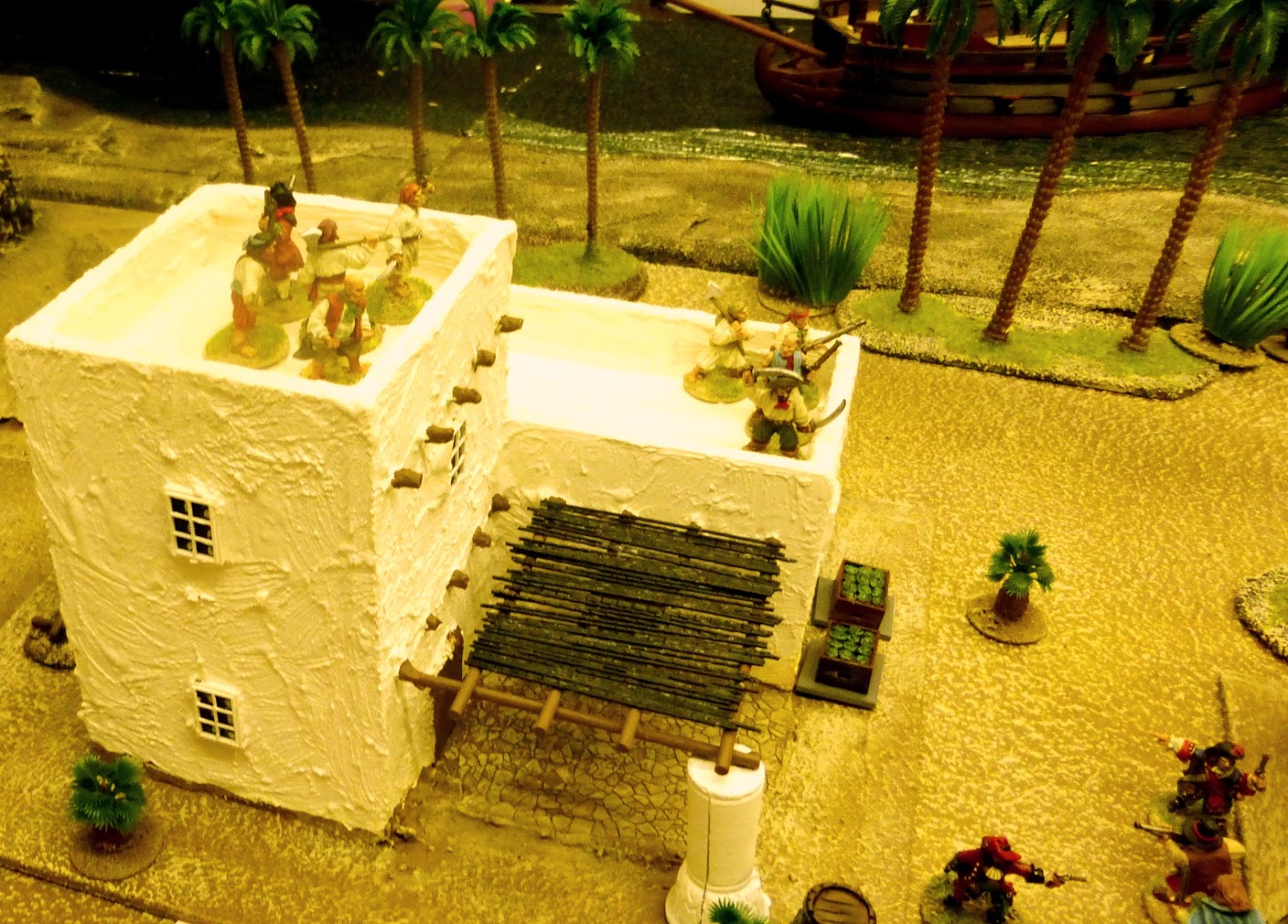 I ended up in a lot of shooting duels with the navy but my dice throwing was as bad as usual (remember that these figures, apart from about ten of them, had never seen a game before so they could be expected to be rubbish) so mostly my units were whittled away by the regulars and one particularly nasty group of sailors.   Another group of sailors kidnapped all the bar girls at the tavern and when I shot at the sailors I found my musket balls unintentionally whittling away the doxies, meaning the group of sailors took less casualties and escaped.  Curses! 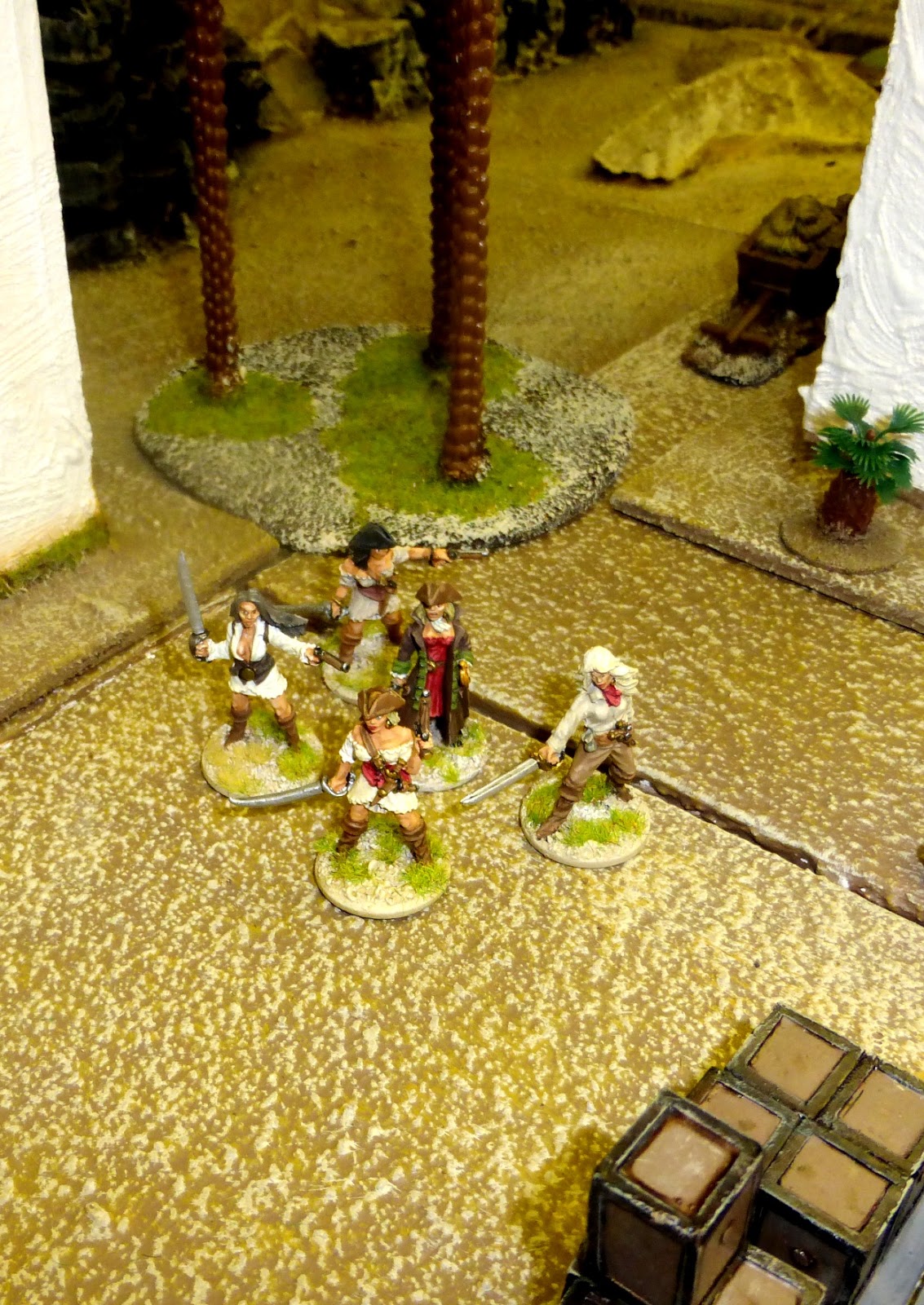 Bad girls in every way.  All Black Scorpion figures

In many games you often find a surprising unit doing better than you would have expected and for me it was my small unit of five lady pirates, who were my only unit to engage in melee and cleared a building of a unit of regulars in short order. They then went onto the roof and had some success in shooting. Sadly, later in the game they got caught in the open by a firing line of regulars and only two survived. They deserve reinforcement so I will see if I can find some of their unpainted sisters in the hope they might see another game. My North Star Anne Bonny is nearly finished, for a start. 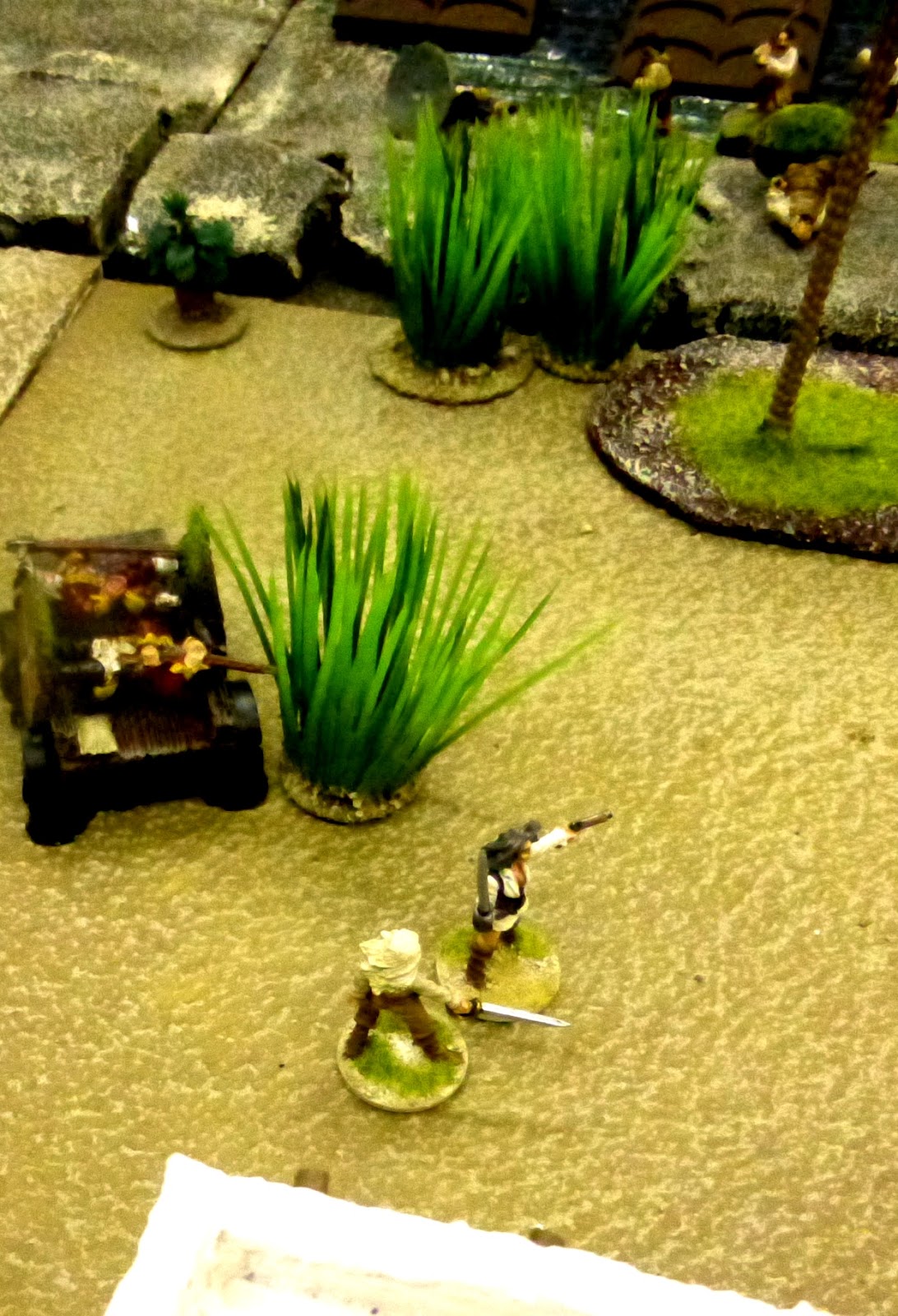 The navy having retreated, my pirate girls are left to lick each others wounds.
The girl on the right is the Black Scorpion limited edition girl from their Cutlass rules

Victory was based on how many points worth of hostages you kept at the end of the game and in the end the pirates took this but we lost the game as Eric had decided that the war artist figure on the naval side had behaved particularly heroically and so the pirates lost by one point. Personally, I think that to have gained these artist points the player concerned should have had to produce a sketch themselves of the artist’s composition (says the person who won a place at art school). 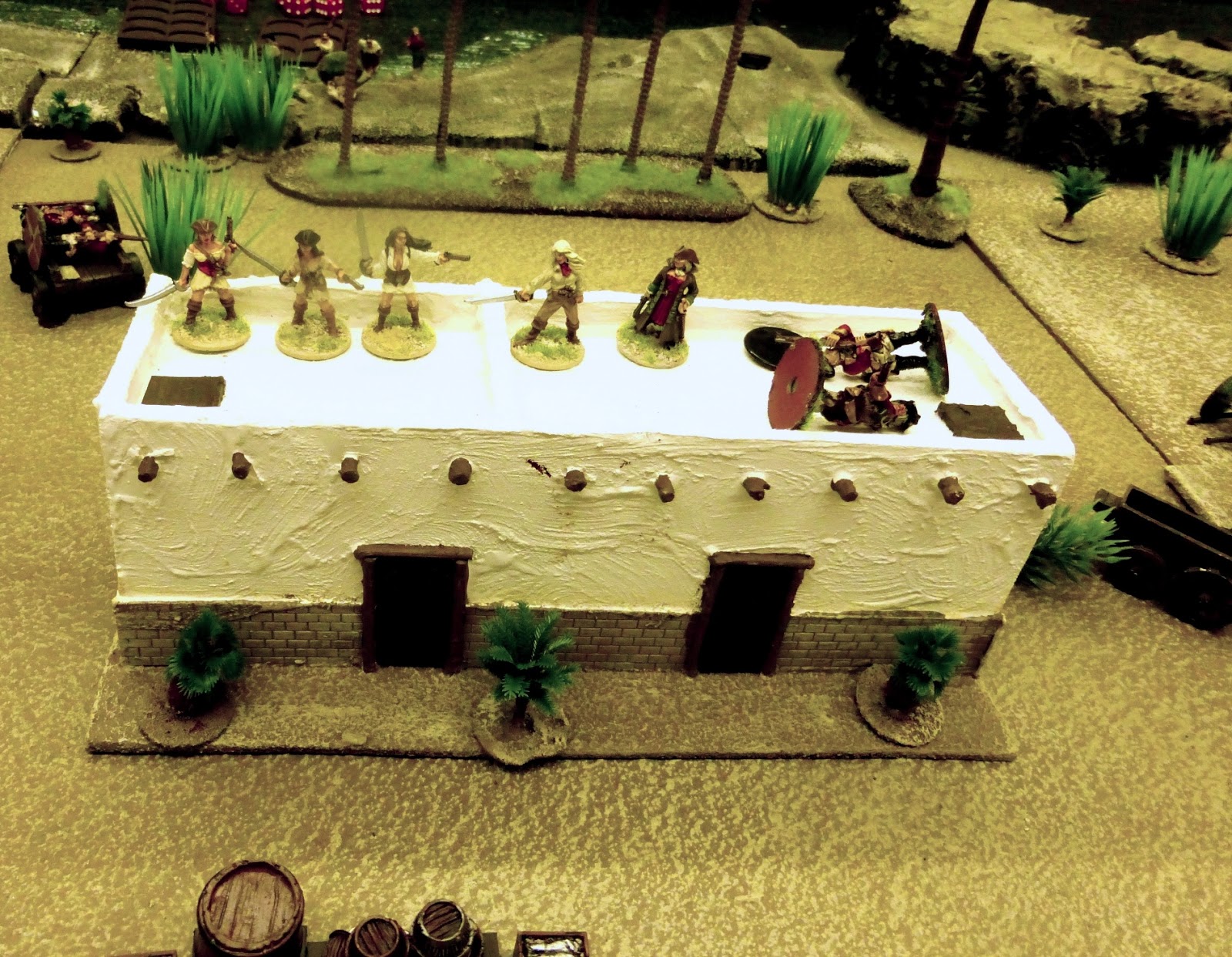 This was a very enjoyable game indeed and has even got me thinking about building some pirate buildings myself.  I think Gary Chalk had a piece in one of the wargames magazines back in the nineties on how to do this.  Thanks, as ever, to Eric and my fellow shedizens!

Posted by legatus hedlius at 4:02 AM

Skirmish wargaming from the days of the Conuistadores until the period of the Three Musketeers.

This blog will record the figures I paint for a number of projects at various stages of completion including Conquistadors, Elizabethan swashbucklers, pirates and The Three Musketeers...

legatus hedlius
I live in Surrey, England but spend much of my year travelling around the world which seriously eats into my painting and blogging time!